A TEMPLE AND THE BEWITCHING BEACH 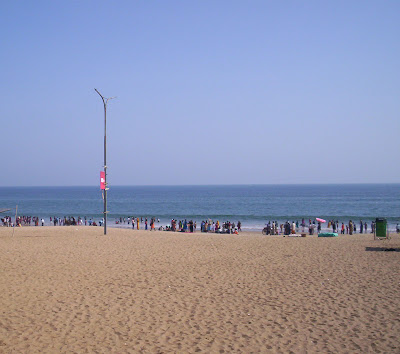 I live near the seashore that touches a small town, full of aberrations and a deformed god, supposed to be the reasons of creation and whatnot, according to the local pundits and the gullible seekers of wealth, health and salvation. The dwarf temple is swarmed by fat rodents and their cronies and the only door remains perpetually closed for the hungry siblings who are accused of witchcraft. At times, I turn into a nincompoop rodent to search for truths inside the temple and later become anemic for years.
The shallow sea near the town I live, is what I like most. At nights, I purposefully sleep late to intently hear the distant hissing euphonies coming from the nearby sea, after the day’s hubbub ceased. The shifting rages which reverberate the ether are so mysterious that I always go limp. As the dog-tired creatures of my town snort hard to habitually ward off their precariousness after adequate supper and sex, I come to realize in the dead of the nights, how vulnerable they are and their gods of every descriptions; including the mythical obese guardian angel, fast asleep nearby. Though, nights after nights, I have been trying to be the self appointed mediator between the sea and the hapless souls, the black magic of the about to be ferocious sea, makes me acutely anesthetic.
The mornings bring fresh summons for me and I habitually run to the shore. I roam the shore for sustenance and assurance for a day, putting my other futures to jeopardy. I find the seashore fascinating, amidst the leisurely congregation of the recuperating tourists and a baby faced sun or a surreal dainty moon that remain the cynosures of the onlookers at the shoreline. These occasional visitors come in all shapes and sizes to eke out fabricated memoirs by turning, crude entertainers on the filthy and partially quicksand, facing the unperturbed sea. They fade away soon, with loads of frivolous luggage; flabbergasted and asphyxiated by the high noon to their erstwhile incarnations via the widest temple road. I often meet them at the local bus stand or railway station, as humble de-motivated mortals, bereft of god consciousness. They take delayed postures to sip adulterated tea from nose picking vendors, with measured thanks on their lips.
On the far ends of my popular beach, the melanin saturated and coal-faced fishermen have set up dingy empires, where they listen to the weather reports and cheap cinema songs from their battery powered radios, round the year, subsisting on out-of-shape women, fishes and vegetable tidbits. Though, the fishermen routinely beat their haughty wives after bouts of booze in a matter fact manner with traditional skills, nevertheless, I find their family relations to be extra cordial and emulative.
The thatched houses on the beach look long rows of compartments, where they cram all together, bypassing incest rules. They cheat on the extra dark nights near the piles of surplus rotten fishes, to be passed on tomorrow as fresh. The wee hours turn frenetic as they compete with each other to reach the wet shore half-naked to cannibalize under the tepid darkness. This is the only time when they refuse to recognize each other. The mass ritual ends in a hurry as the men folk take to the waters mounting on the crapulent dinghies near exasperated. When they return back by the noon with the cache of dead fishes, they themselves look like repenting corpses with forced smiles. They immediately smoke stunted cigarettes and abuse their fate surrounded by eager hawkers. Soon they retreat to their huts to count the secretly kept coffer and turn pale.
The amorous daughters of the fishermen long to tame men from distant lands devoid of love; to get impregnated by the holier-than-thou future husbands. These gentlemen stash genuine dollars and yens inside their undergarments drenched with pheromone fortified perspiration. Eventually, much married daughters of the fishermen village become the deities of the crestfallen beach waiting for the tsunami.
The small and big hotels on the shoreline do hefty unaccounted business facing the deep blue sea that stretches till the meaningless hazy horizon. They try to look exotic, boasting of their heritage and noble ancestries to impress the oxygen starved gullible and pliant yet crooked guests. From nowhere, they descend to infest the murky hotel rooms and the private sliced beach. They derive status from the sea-facing suits and hot massages on the encroached beach sands. They bath, after years, to their perfection and appear to look innocent under the special beach umbrellas. With inflated egos and bland aphrodisiacs the beach werewolves rejoice, to the utter amazement of the bellboys, till they pay up their sins at the cash counter of the hotel. Thereafter they never return back for eons.
The sea beach near my small town is suitable adopted by the lanky bootleggers, athletic holy men, cunning mendicants, sentimental dogs, rowdy crows, slippery racketeers, miserly swindlers, juvenile valetudinarians, cute vagabonds, small time shrewd itinerant merchandisers, extra-smart eunuchs and curious onlookers; who mingle together to conveniently forge an aesthetic crowd on the visible shore, as if they have come to swear by the etiquette of a supposedly serene and tranquil den. It is, however different in the casuarina thickets, nearby.
By Priyabrata Nanda
Email ThisBlogThis!Share to TwitterShare to FacebookShare to Pinterest
Newer Post Older Post Home