THE LURE OF THE MORNING.... 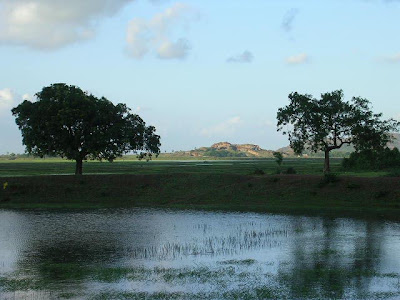 The probable sun was yet to come to the horizon. Although, the imposing and expanding sky was virtually impregnated with an array of impending twilight seductively beneath the occasional canvases of slow moving swinging cloudlets hanging here and there in a most mystical formation, it was neither comprehensible nor obscure, somehow.
I saw the tenderest moon of yesterday night still hanging in a corner in a most delaying mood. I could also see a blinking star, a loner still definable. I saw the whole sky painted in myriad shades and strands, smelling raw and recent. It gave me the feeling, as if I must swill them alone without ever anybody's knowledge or knowing.
Yesterday, I had a dream. Flowers spread from horizon to horizon and birds chirping on branches, decorated with symphonies of love for unknown reasons. Am I still dreaming or they were just there as they are here now?, I reasoned. Now also before me lay bare, the hennas of my dreams. I was but seduced to pluck them one by one with care, all for her and to say good morning, when she opens up her tender eyes, burdened.
I felt like waking up everyone from their slumber, excluding the nullifidians and somnambules, to lead them to the virgin fields. I thought of course jealously, it would be wonderful, if our feet could touch the dazzling, diaphanous recalcitrant dews, crowding nakedly the tips of the green grasses. They were simply innocent, like nothing else one could find, at that appointed hours.
For these moments, here, the arterial roads, lanes and by-lanes seemed vast, expanding and inviting. Being alone on yesterday's busiest road of this small town was a pleasant surprise of sort. No one races now for something that s/he would be foregoing some day, somehow willingly or accidentally. Should not they walk on these roads with prayers in their fragile hearts when they are able to and want to? Can't they simply stroll aimlessly with songs on their anaemic lips? Can't they stop running even once, leaving aside their out-of-shape drums? I was sure, if they ever walk on these roads aimlessly, they would understand that throughout the days, these roads virtually can carry them nowhere.
The mansions and huts to me, looked humble and alike. Over the days, all the nights have made them subdued meditating hermits. I gazed at mine and others' questioningly. I was happy to note that none of them had any sense of sorrow or pride, hanging on their faces. I remembered distinctively that they were no different from those groves I had seen minutes before, on my way this morning. I had an immense sense of relief to further know that they were no more expanding or decaying. I also thanked their fates that most probably they will be still standing, where they used to be, at least for this today.
Down the road, I saw a beggar couched on the far end of my familiar pavement. She could be dead or may be alive for the show, I actually did not know. What I knew for sure was that she was in a sea of liquid tranquility largely thrust on her. She appeared freed fresh from the savage jaws of the nights of winter and rain. I looked closer and found her possessions un-possessed. I thought, yes the day was yet to resume. I shuddered in fear and made an exit for safety.
Now, I naturally wanted to touch the enchanting woods, wild and vivid, near the spring that existed for ages outside the ring of the hectic town. It was so quiet that for long I was able to actually hear the faint throbbing of my hearts that included other's, as well. In fact, it was everywhere in that tepid darkness, sounding like some long forgotten lullabies.
Today's morning was so different that I wanted to be lost. It was so vast that I thought that I better not have any direction. Then, where do I go? Everywhere? Nowhere?
For few, this morning might be a cascade of hopes, after nights of gnawing despair. I knew, they were still asleep without knowing it. Why can't they find the good news a little early? Probably, they need to prepare themselves. 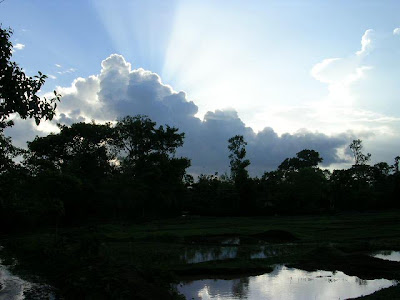